More than once in history there has been a call to prepare for war.

SIGNS OF OUR TIMES PROPHECY DAY 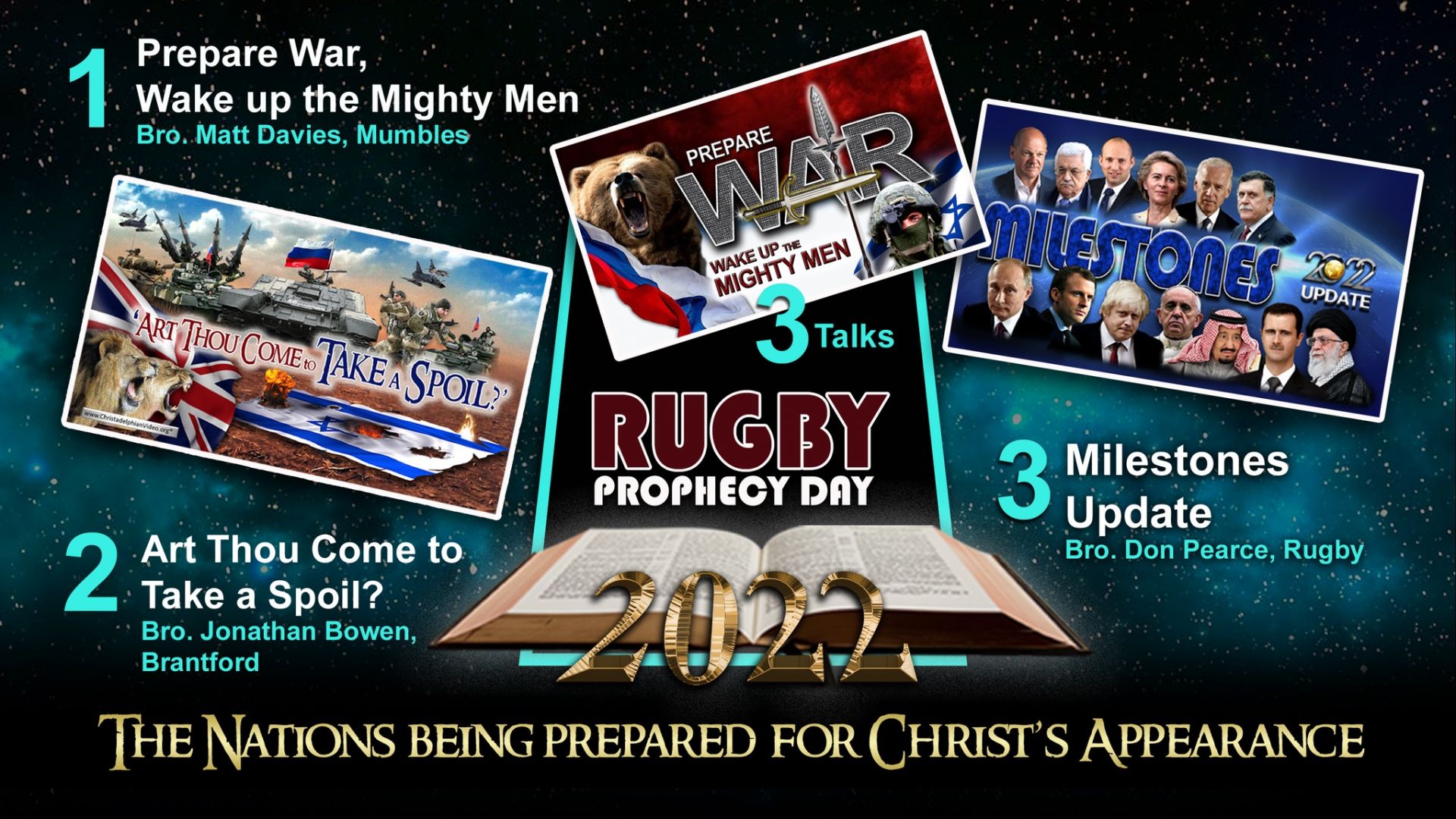 (?)Christ back on earth, nations increasingly hostile to Israel and so prepare to invade her.

The world is on the brink of war with one of the largest military build-ups in Europe in modern times. At the heart of the conflict is the Ukraine which is caught in a power-play between the West and Russia. But what does the Bible say about this?

In this talk they’ll reviewed the prophecies of the Bible which speak of these times that we are living in. There was demonstrated that God has a plan and has given signs in His word the Bible to encourage believers that He is in control.

Matt Davies looked at the prophecies of Armageddon concerning a coming world war which will eventually see Russian armies coming down into Israel. This will usher in the return of Jesus Christ who will save Israel and establish God’s Kingdom on the earth.

Art thou come to take a spoil?

Preparing Israel and Arab nations for the invasion and Kingdom. “Don’t flee to Egypt – go east
to Jordan”.

Please consider the desire of the spoil, look at what it entails, and consider how Israel has become so prosperous.

Finally they looked at Russia’s evil thought that coincides with the tidings described in Daniel, it’s move into Jerusalem where it thinks it will reign supreme.

YouTube is shadow banning this Video and channel. If not banned, perhaps it would have 1000s of more views!

The remarkable timing of the Arab change of attitude so can be blessed in Kingdom. Matt 25:31-46 and any other live matters.

At the study day was also looked at the basis of how the world’s nations will be accepted – or not – to live in the Kingdom.

What in God’s eyes distinguishes a “Sheep” Nation from a “Goat” nation?

Not all “Sheep” were born “Sheep”. They have changed from “Goats” to “Sheep”! In fulfilment of Scripture this is happening just at the time which will see the imminent return of the Lord Jesus, to judge his saints and to judge the nations.

There was looked at the unfolding Abraham Accords which are transforming the Middle East. The speaker  Don Pearce looked at the development of Britain and her allies to play their role in these last days as Britain emerges from her 70 years of decline, precisely on time! For him it is clear:

We are living in exciting times that herald the return of the Lord Jesus.

2 thoughts on “Nations being Prepared for Christ’s Appearance”

The longest public speeches of Jesus that we have on record have nicknames: The “Sermon on the Mount” and the “Sermon on the Plain” e.g.. Jesus thought carefully about what and how he would show people the Father, how to be the vehicle by which people were drawn to Him.

Was it a year not to step on the toes?

Introducing a news website that may well deserve your attention as it also debunks fake news and brings out the true facts.

Have the courage to face the light of your own Being.

Originally posted on Purplerays:
“Your time is limited, so don’t waste it living someone else’s life. Don’t be trapped by dogma – which is living with the results of other people’s thinking. Don’t let the noise of other’s opinions drown out your own inner voice. And most important, have the courage to follow your heart…

My earth, your earth..

Originally posted on johncoyote:
https://www.youtube.com/embed/ddLd0QRf7Vg My Earth, our Earth..  What have we done to you?Beautiful Earth.We have destroyed the great forest, polluted the great seas and lakesTook ancient  people from their home without real guilt.Many of the free animals are extinct.Kind Earth.Please forgive the greed  of man.He had no common sense.We need the gift of…

Good morning…. Go to the center of your inner being

Originally posted on Purplerays:
. Go to the center of your inner being. Radiate peace in every direction. A compassionate heart radiates rays of beauty that removes the clouds of million hearts.ِAmit Ray Text and image source: Jana Eid https://m.facebook.com/story.php?story_fbid=10166667338305093&id=772270092

Why did experiencing mental illness make me question becoming a mum?

When Rhiannon Lucy Cosslett weighed up the decision to have a child, she found herself frightened by the prospect of being a parent who’d struggled with mental health – and may struggle again Why did experiencing mental illness make me question becoming a mum? It is often said that we are in a mental illness […]

A key to effortless weight loss

After the Winter holidays, lots of people have the intention of the new year to lose some weight. You may be disappointed to learn that despite the $255 billion global diet industry, £2 billion in the UK, objective studies show broad agreement that diets don’t work. “I would agree with that,” says Trine Balsvik, “Eating […]

Three stories you should read today ‘How I’m reducing my heart attack risk – and you can too’ Now is not the time to be rushed to A&E with cardiac issues, so what can we do to reduce our risk? Liz Hoggard has the answers Statins help lower bad cholesterol (LDL) in the blood. They […]